“Isn’t that what I just said?”

I was recently in India giving a keynote presentation for a group of women leaders.

One of the questions that came up was, “What do you do when you are the only woman in the room, and you contribute an idea and no one pays attention…

“…then 10 minutes later someone else says the exact same thing, and everyone responds as though it’s brilliant, and he gets credit for the idea?”

This often happens to women, but I want to be careful to note that it does not happen only to women.

If you are having some trouble asserting yourself, and feeling frustrated that your ideas are being ignored or stolen, here are some things you can do during the meeting and afterwards.

How you can get your idea back

The answer I gave in this room drew a spontaneous round of applause. Since it struck a nerve I wanted to share it here. Then I’ll break it down and give you some ideas for how to think about this, and things you can do in your own situation.

What I said, was…

In that moment when the other person presents the idea you just stated as their own, you can’t hesitate.

If you hesitate you give the crowd a chance to react to the other person stating the same idea — and then you have lost it. The idea will be now associated with them.

You need to jump on it.

As soon as they repeat your idea, without hesitation say,

Then you take it back…

Here are the steps to consider

Observe people in meetings. See how much of the talking that gets done actually comes in the form of interrupting. It’s a lot.

If you are not getting your ideas across in the first place, you need to learn to interrupt.

But if you know it’s an important idea, you need to interrupt the person who interrupted you.

Say, “Hang on, before we move on, we really need to consider this idea”.

In the example I gave above, the key was to not hesitate.

The habit that allows you to learn to interrupt is to not hesitate. If you have something to say, and the crowd is getting away from you, you need to jump in.

You don’t have time to think, Should I speak? Will people listen? Will I get rejected? Am I afraid?

If it’s an important point you need to get across, you need to jump in as in the example above.

Assert or reclaim your idea before it becomes someone else’s because you didn’t interrupt fast enough.

Spending my career as a woman in technology organizations, my ideas (and I, myself), were not always welcome or respected. I was ignored, shut out, and shot down a lot.

But I wanted to be heard so I persisted. It often felt like swimming upstream — doing things against the current of the natural environment. But that’s what it took.

Again this is not just a female thing. I have heard the same thing from men who were not naturally assertive. It occurs also for men and women in global companies, for whom english is a second language, when they did not speak English as FAST and certainly as their peers.

I know interrupting and not hesitating will probably feel awkward if you are not used to it, but…

…if your ideas are continually getting ignored or stolen, and you want to change that, you are going to need to change your behavior.

The rest of the group is not likely to change, or to become more open, patient and welcoming.

You will need to assert yourself more, and that is always a bit uncomfortable in the beginning.

If there is a situation where you know you will want to raise an idea in a meeting, it’s not just a spontaneous idea that came up during the meeting, come prepared with some data or benchmarks, or a customer story that will give weight to your idea.

Even if someone else tries to steal it, if you are the one who has done the preparation, you clearly not only already had the idea, but made progress on it. That will help you secure your ownership of the idea.

Even if you miss the opportunity in the meeting to reclaim your idea, all is not lost.

I have had this happen to me, and dealt with it by following up with the “stealer/new owner” of the idea afterwards, by gently letting them know that they did not get away with it entirely.

I would say something like, “I’m pleased that you were able to get this idea over the finish line. It’s clear that I really support this idea, since I brought it up earlier in the meeting. Now I’m excited to help put it into action. How can I help?”

I put this followup in the category of,

When something happens that is not OK with you, it’s important to tell the person who did it that “that was not OK”.

I would not go so far as to say, “You stole my idea and that is not OK,” because you also (sadly) need to be prepared for the fact that their transgression was not actually stealing your idea outright, but being guilty of dismissing you in the first place, and not listening to you at all — so they didn’t even hear the fact that you had the idea first.

But in either case, this type of followup will let the person know that they can’t just get away with taking your ideas (or not listening to you) without at least looking you in the eye and knowing that you are on to them.

It really does take some of all of these behavior changes to get your ideas adopted, but if you are willing to work through the initial discomfort, you can absolutely change the dynamic.

Another aspect of getting ideas across is making sure you have a strong Executive Presence. If you want some help with your building your credibility, confidence and assertiveness, I have a playbook on Executive Presence that can help. And I’d like to offer it to you for FREE.

It includes a streaming webinar and a workbook with tools templates and scripts to help you show up in a stronger and more confident manner.

Get the Playbook on Executive Presence 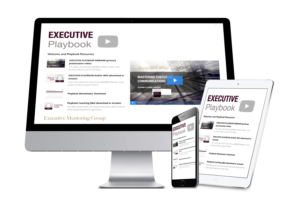 Take a look at the playbook.

And you can get it for FREE with a Trial Membership to my Executive Mentoring Group.
(No risk: You can cancel at any time. Really.)

This is one of many Executive Playbooks in my Executive Mentoring Group.

You can start your Free Trial here.

Or if you would like some personal help on your own professional development, check out her Executive Mentoring Group. It’s filled with insights, resources and support to build your executive confidence, advance your career, and includes direct mentoring from Patty.

Reflect on your best work: write your stories
Is it Really a Ruthless Priority?
© 2021 ALL MATERIALS COPYRIGHT AZZARELLO GROUP, INC. | CONTACT | PRIVACY