This is a bit of a diversion from my normal topics, but I know many of you are in technology companies, and pretty much all of you are people…

And I have something to say about this.

I was traveling in Cincinnati recently, and was greeted with the following in my hotel room. I was staggered.  I removed the actual hotel name, but this was real.

Is it just me, or are these 19 steps to program a wake-up call a bit much? 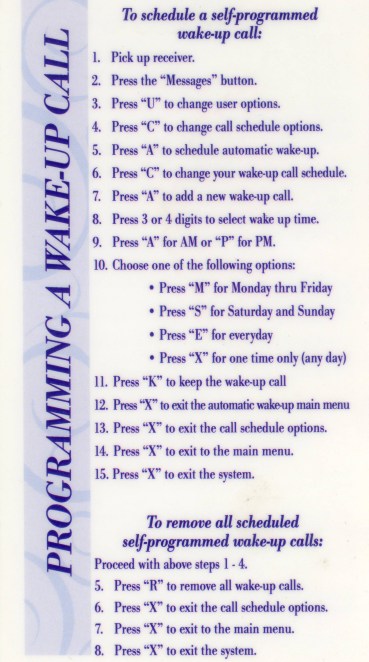 I built a successful career in technology by following one guiding principle:

Make the technology less painful for humans to use.

Focus as much (if not more) energy on the human interface as on the technology itself.

Don’t ever show of the richness of your technology in the user interface.  Focus completely on the user’s task. Understand how people are thinking about the task they need to do, and help them do it the way they are inclined to do it.

(Break them at your own business peril.)

Here is what I mean:

1. Technology should not rob people or their humanity.

Probably the best example of this are those voice automated systems that make you talk to a computer on the other end of the phone.   I don’t know about you, but I hate this. I would feel much less robbed of my humanity if I was greeted with a computer voice that said,

I know I’m not a person like you are, and that you’d rather talk to a person, but we think we can help you faster if you are willing to give this a try. We won’t make you talk to a computer and pretend it’s a person, and feel like an idiot shouting answers and phrases repeatedly because we can’t actually understand them… Please help us route your call by keying in your account number and answering ONE question – then you’ll be connected to a real person.

Any time your user interface makes a person translate something they are thinking or feeling into a narrow input that your technology will accept, you have robbed them of some humanity.

2. If you present technology instead of a human interface it HAS TO WORK

If you want me to sign up for your service on your website, don’t require a special new version of a flash plug in for me to do it.  Don’t invite me to leave you feedback, only to have a link that doesn’t go anywhere.  Don’t optimize your interface so much for one platform or environment that it doesn’t work right in others.

When something goes wrong…

A human can recover and use creativity and judgment (and opposable thumbs)  if the transaction does not work. Technology just sits there there not working, and the user goes away having failed to complete the task.

I was duped recently at the airport when I accepted a boarding pass sent to my mobile phone and got to an airport that didn’t have the ability to read it.

Go out of your way to use technology components that are as standard and hard to break as possible.

Don’t try to make your screens extra-pretty, or use bleeding edge widgets and gadgets in your user interface because they amuse you, you are trying to be impressive, or you want to try something new — especially if if there is to be no-human back up when it doesn’t work.

Set your standard to “It has to work”.  Not “It has to be leading edge”.

If you replace humans with technology, if it doesn’t work you will lose customers because you have given them no possible alternative but to go away. There is a corollary to this law which is “Don’t make people work hard to give you their money”.

This issues is starting to go away as technology is actually working better and young people are immune to thinking that it is their fault if it doesn’t work.

Complexity is the enemy

But when technology is unnecessarily complicated and hard to use, it makes (us old) people feel inadequate because we can’t accomplish the task at hand.

I don’t think I have ever got through a self-checkout lane without requiring assistance from a clerk and feeling a bit stupid.

If you buy wine, someone still needs to check your ID. You Fail.

If you by an item that is too large to put in the bag, the system will freeze because it can’t sense that you put it in the bag after you scan it. You fail.

If you buy organic produce, it doesn’t have a selection for organic. You Fail. At this point you are given the choice either to wait for help (you feel stupid) or to steal money from the store because you can’t find a way to pay the organic up-charge (robbed of your humanity, and being made to work too hard to give them your money).

The good, at least mitigating, news is that most self-checkouts follow rule number 2.  It HAS to work – so they put human backup there.

Making technology better for humans is good for business.

Apple is an obvious example. But even putting Apple aside as an outlier, I can tell you that in every business where I had responsibility to bring technology products to market, focusing on the human interface was good for business.

We put extra effort on the user’s thinking process, the user interface, the install, the demo, the “start here” experience, the documentation, the customer support help desk, and the sales and contracting documents and processes.

By doing this, my businesses were able to steal share from competitors who were overly focused on the features of their technology alone, and tortured their customers and partners because of it.

Living Your Values at Work
How to Talk (or sell) to Executives
© 2021 ALL MATERIALS COPYRIGHT AZZARELLO GROUP, INC. | CONTACT | PRIVACY