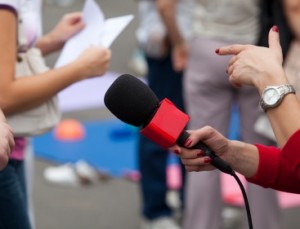 One of the CEO’s I am working with on a business transformation said to me about his managers,

“No, he won’t actually help solve the problem, he is more of a reporter.”

Think about your behaviors.

Are you at any risk of being a reporter?

Do you often highlight things that aren’t working?
Do you study things and point out what is wrong?
Do you regularly play devil’s advocate?

I always talk about the importance of adding value to the business.

When it comes to reporting trouble, many people confuse what adding value actually means. They think that identifying and exposing problems is adding value. Or that doing analysis and providing insightful commentary about what is broken is adding value.

So, you may be thinking…but you have to identify problems if you want to solve them. Or you need to know about issues if you want to fix them. Surely the person who raises these issues is adding value because the business “needs to know”.

The big, BIG difference for adding value is between talking and doing.

It is the difference between describing the current state or moving something forward. …Between exposing a problem and fixing it, or at least proposing a solution.

Do you have reporters on your team?

You can find them — talking.

Do you have solvers on your team?

The solvers are the ones that show up and say, nervously, “I hope it’s OK, but I did this.”

Or, “I found this nasty issue, but here is what I have done to resolve part of it. Can I get your thoughts on these two options to fix the rest of it?”

When solvers run into an impossible problem they say to themselves, “Man this is screwed up, what is the first thing I am going to fix? What will I propose that will move us forward?”

The reporter is the one that gets to “Man, this is screwed up”, and thinks “I have to come up with the most compelling way to communicate how big of a problem this is so that people will get sufficiently worried about it, and I will get credit for exposing it.”

Reporting vs. Solving – the behaviors

Example: An organization that is chronically late delivering.

The reporter might analyze root causes and talk about lack of definition, poor test plans, poor communication, lack of accountability. All may indeed be real issues, but the reporter will expect someone else to lead and to act.

The solver will think through what actions might actually help. Even if it won’t solve the whole problem, they will endeavor to at least move something forward.

In the case of something like chronic late delivery a solver might say, “I am going to create a sign-off document that defines what finished looks like. This will help all of us clarify what specific actions must be completed to reach the deadline. It might not solve the whole problem, but it will make things better and we will learn something by doing it.

If an organization is not selling strategically enough, a reporter might present information about background and revenue and current sales skills, and recommend kicking off further study.

A solver will find someone in another organization inside or outside the company who is an expert and learn from them. They will experiment. They will try a new sales process. They will tune it until they hit on what succeeds. They will propose specific changes to share the learning.

What is your proposal?

You want to send a clear message that being a reporter is not good enough.

In every organization I have ever led or consulted with, I have found that merely responding to every single news report with the question, “What is your proposal?” goes a long way to solving this. Consistently doing this changes the culture and separates the solvers from the reporters.

The people who get annoyed by this and say things like, “I just thought it was important to make you aware of this”, (by the way, even typing this makes me cringe – I can still picture the specific people who regularly said this to me). These people will never be significant contributors to the success of the business.

THINGS YOU CAN DO NOW

1. Subscribe.
If you found this useful, you can subscribe to this blog for free and get updates in your email or RSS reader.

3. Check out a short video about my new book:
RISE…How to Be Really Successful at Work AND Like Your Life.