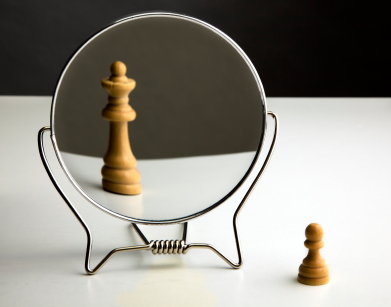 The source of power

This is not a deep psychology dive on ego and power in business leadership, which is a huge topic…

But I want to share some practical observations about how good leaders build a powerful team by sharing power and others build themselves up (falsely) by imagining they can hoard power personally.

I am a fan of the former…

What I have found is that the people who imagine that they have more power than they do can’t distinguish between the fact that their role has power vs. that they are powerful personally.

A telling behavior to decide what camp an executive is in is to see how they treat people when they meet them. Especially, people in lower level jobs (or waiters).

I have met many of these power executives, but I am thinking of one woman in particular who exemplified this behavior. She was a C-Level direct report to the CEO a fortune 50 company.

She was meeting me and my peers who were at the time C-Level direct reports to the CEO of a fortune 5000 company. It was immediately clear that she saw us as way below her on the food chain.

I remember thinking when I met her: wow you are trying really hard to come across as a big, scary executive.

I wondered… is this because:

1. You are insecure and need to make people feel like you are more powerful than they are?
2. You were taught, or believe this is the way a big executive is supposed to treat others to gain their respect?
3. You are self-involved to the extent that you don’t even realize that you are so thoroughly dismissing people?
4. You actually believe that you are a superior life form?

I never know which of these is at play when I meet one of these “power-people”. But I always think that they are confusing the power of their role, with their own power.

The leaders that most inspired me the most were the ones that did not get caught up in personal power.

They were the ones who would sit across the table and make people feel like equals. We are both people, and we are in different roles, but we share the business challenges as people.

That is time taken away from effectively leading. Not to mention it does not build any trust and loyalty.

Where if you take the other road of sharing power, and building a powerful team beneath you, you actually gain real power. Because you end up with an army of people who will do great things to make the business succeed – and they have your back.

Isn’t that more, actual, useful power than trying to claim false power for yourself?

I’d rather have 1000 peoples’ worth of positive power, genuine support, and forward momentum in my business, than to try to build my own power by keeping 1000 people down. It is exhausting to even think about! I choose the road of helping people thrive.

Here are some practical ways that I have seen the difference play out.

If the thinking starts with we are both humans vs. I am the boss and you are the worker, you create an environment where everyone feels acknowledged.

If you flaunt special privileges that only the boss gets, everyone else feels resentful and will not bring their best to the business.

So you are shooting yourself in the foot on running an effective organization.

Spending personal time with people in the trenches, on the assembly line, on the help desk, or literally in the trenches (if your business digs trenches), shows that you understand and value all the jobs in your organization and you are not “above it all”.

It builds tremendous loyalty because when you ask someone to do work for you, they know you appreciate what you are asking them to do. It is hard to over-estimate the value of this as a leader.

People protecting their power need to be right and to stay right. So it’s not just that they are not good listeners, they actually need to not listen.

Leaders who are genuinely curious invite new ideas and are always learning. They learn what is really going on in their organization and therefore know what is causing inefficiency, frustration and suffering — so they can fix it.

The “Right” executive doesn’t want to hear it. They are right often enough that they can succeed to a certain extent, but they miss the opportunity to recognize breakthroughs that others might contribute.

I recently heard a wonderful story about how an entry level accountant was responsible for the turn around of a $100+ million dollar business because the CEO encouraged people at all levels to think independently and share their thoughts.

This guy caught a problem with how they were accounting for profit (or lack thereof) that no one else was looking at. He brought it to the CEO who then dramatically changed the strategy overnight to stop a huge ad spend, and restructure instead. If the CEO did not invite input and listen to it, they would have proceeded on an agressive plan into bankruptcy.

Promote others vs. Inflate yourself

Leaders who take credit for their organizations’ work are again, trying to hold on to false personal power. Leaders who promote and elevate their stars build a much higher value organization.

This is well said in the book Five Frogs on a Log by Mark Feldman and Michael Spratt: “A players hire A+ players, B players hire C players, and C players hire idiots.” Insecure leaders who hire weak players so no one threatens them, make the whole organization weaker.

A players (leaders who share power) hire people better than themselves and give them support to excel. Then they give them recognition and help them move up. The whole organization gets stronger.

People protecting personal power are very secretive. They believe that if they know more than everyone else, they will remain more important.

Real leaders communicate a lot. They make it a point to share as much information as possible with everybody.

Another trait I have seen with leaders protecting their personal power is that they buy people off instead of respecting them.

They pay people more money than they could make elsewhere, with a key requirement of the job a being:

Don’t question me, stay in your place, and make me look good. Build up my ego by being at my beckon call. I pay you a lot, I deserve your un-wavering and constant adoration.

Effective leaders win people over by building an environment of trust and respect. They create meaning for people so they can feel proud of their work. They offer personal recognition. They go out of their way to make the work matter to people the people doing it.

I was very fortunate early in my career to meet a mentor who showed me that you could be a very successful business leader by respecting people as people, and sharing power.

There are many examples of executives that go the other way… They hoard power and treat people like crap. I might have believed that was necessary without a good role model.

You can certainly succeed as a power hungry asshole, but it’s not a requirement. I also believe that building a strong team is a much more reliable approach to achieving success, and it gives you more real power in the end.