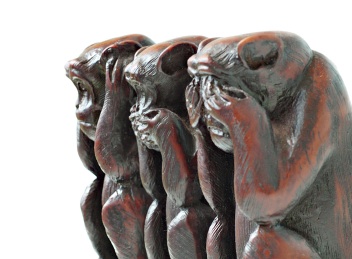 Corporate crap is all that extra, low-value work and random pressures that interfere with delivering on your job…

It’s the stuff that drains your time and energy, and annoys you a lot…

It’s the stuff that makes you feel like you are not controlling your own destiny.

It’s things like needing to defend what your group does, or deflecting low value initiatives and useless demands on your time.

By the way, the higher you advance in a corporation, the more crap you get to deal with.

It’s part of what they pay you for.

One way to think about this is… if you were to go from a corporation to a startup, you would notice two things:

1. There is no corporate crap. You spend virtually 100% of your time moving the business forward. This feels great.

2. You get paid a lot less. This feels less great.

But it’s a trade-off. I always thought of this difference in pay as the money they pay you for dealing with your allocation of corporate crap.

Politics and The High Ground

One of the biggest time and energy sinks is politics. There is an endless source of negative drama you can get drawn into at work. This is not the high ground. But avoiding it is not free of time and energy either. Crap.

For example, if you get so wrapped up in staying on the high ground that you say, “I refuse to engage in politics. It doesn’t add value, and it’s wrong” this can come back to bite you.

It’s important to realize that if everyone else is playing politics, and you are not, you can get damaged by being invisible, or by having the wrong story out there about you. So you need to do something…

One of my mentors gave me some advice that really stuck with me when I was taking the high ground and refusing to engage in a political war.

I told him, “I won’t engage in empire building because it’s wrong. We are trying to cut costs and having a big organization doesn’t mean you are adding more business value. I would rather deliver on my business then spend time building an empire.”

He said to me, “Patty, the only problem with that approach is if you are the only one who is not empire building, you will be left with no people”.

So how do you stay on the high ground when others are being political and you need to defend yourself?

Visible, but not Annoying

I never ever advocate politics and publicity instead of excellent results.

The most important thing is to deliver excellent results first,
THEN make sure to get visibility for it.

This is how you accomplish what I describe as “Be Visible, but not Annoying”. If you are known for outstanding results, visibility does not look shallow or political. People value knowing what you are doing when you are doing great stuff.

For example, if someone is spreading the word that “Patty is doing the wrong stuff, her business is not going well, and she is a weak leader”, that story is getting air time. Even if it’s completely untrue, people might be saying this because they are trying to steal my people, or knock me out of the competition for a promotion. And other people might believe it.

I don’t engage in that type of conversation at all, either to defend myself or to go on the offense. It adds no value. But you have to do something.

Saying nothing by refusing to engage in politics can damage you.

You need to control the story about you. So what I would in this situation is to make sure to communicate about the value of what I was doing to key stakeholders. Yes it takes time. Yes you can call it politics. But if your intentions are honorable it is not a negative thing.

By putting excellent work and high-value results out there where people can see them, you “respond” to the political attack, you take control of your story, preserve your Brand, and still stay on the high ground.

Ok, back to the plot. Although I didn’t go on the offence and try to build a big empire, I participated in enough discussions and debates to create positive visibility for my team’s work. I was able to control the story about me. I sold the value of what my team was doing which made it clear to everyone involved that my team needed to remain intact.

I was able to stay on the high ground. And by engaging in the game and making my team’s work visible, I was able to defend against the empire builders.

You don’t have to engage in shallow, ugly, negataive politics, but you do need to be aware that others are doing so, and stake your claim on the high ground in a positive, high-value and visible way.

It takes some time

The unfortunate reality is that it does take time. And it’s time taken away from moving the business forward. But once you see this as part of your job, and allocate some time and energy to it, you can proactively eliminate the issues, and take a lot of the stress out of the situation by taking control of the outcome.


Subscribe for free
If you found this article useful, you can subscribe to this blog for free and get updates in your email or RSS reader.